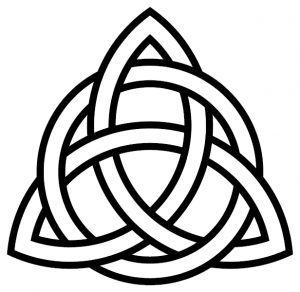 The one with the most “wow” factor, the first possibility is often advanced:

Bentley Layton allows that the reference may be to theogony, saying, “Apart from its title (Peri ton trion physeon), the work apparently does not survive. It must have concerned the structure of the spiritual universe. A threefold division of the Barbelo aeon is described in certain works that recount the gnostic myth (cf. EgG 50:23f), but these divisions do not correspond to the three persons of the orthodox trinity. A trio of hypostases also figured in Platonist philosophical speculation starting at least as early as the second century A.D.” (The Gnostic Scriptures, p. 233)

Even though we might believe that the text was written about theological matters, as Layton suggests, the doctrines could have been so far removed from the later subject matter (Father, Son, and Holy Spirit) as to be unrecognizable to the later Trinitarians.

Seemingly due to one reference in the 1911 edition of The Encyclopedia Britannica that has been repeated with mutation in the Wikipedia, the second possibility is also witnessed online, that the work ‘On the Three Natures’ regarded man:

An idea about three classes of men does date back to Plato, and this may be behind the reference: three different types of people in the world. This would account for the statement that Valentinus took the idea from Plato.

That this is plausible can also be seen from the commentary of Heracleon, a Valentinian Gnostic, on the Gospel of John, as quoted by Origen. Heracleon takes the story in John 4:4-42, about a Samaritan woman, and interprets it as an allegory in which the Samaritans represent spiritual people (Gnostics), who respond to the Savior instinctively due to the spiritual spark inside them, as contrasted with the Jews (psychical Christians) who worship Jerusalem (the Creator). The allegory is complete when non-Christians are understood as material people.

Another Valentinian text that shows the division of humanity into three types is the Tripartite Tractate, which says that the arrival of the Savior meant that humanity “came to be in three essential types, the spiritual, the psychical, and the material.” These correspond to those whose response is immediately positive, those who are hesitant, and those who “shun” saving knowledge.

But that’s not the only possible understanding of what the text may have held that was later misrepresented by Marcellus. The ideas of the Middle Platonists also might account for the reference (with “the notion of three subsistent entities and three persons”). In the Middle Platonists, we see a development of thought about the “threefold nature” of man, instead of just three different types of man. Plutarch saw three aspects in every individual person, namely, the body, the soul, and spirit.  This could be a better match because it posits three natures of man in one person, more similar to the theological debate taking place in the fourth century, instead of merely three different types of men.

As explained by John M. Dillon, “In this connexion must be introduced the Gnostic doctrine, found also, as we have seen (above, pp. 211ff.) in Plutarch, of the threefold nature of man, not of body and soul only, but body, soul and spirit (pneuma), which in Plutarch is given the more traditional title of nous. Each of these three elements arises from aspects of the experience of the lower Sophia – Matter, from her Passion; Soul, from her ‘turning back’; and Spirit, from the light shed upon her by Christos, the logos-figure mentioned above. Spirit, therefore, is to some extent an element superior to Sophia and to the cosmos.” (The Middle Platonists, 80 B.C. to A.D. 220, p. 388)

And what of the third possibility, that Valentinus didn’t write the text? Here we have to hit the books to find even the assertion of the idea. Birger A. Pearson writes, “A fourth-century author (Pseudo-Anthimus) mentions a book On the Three Natures allegedly written by Valentinus (fragment 9), but this report is clearly spurious.” (Ancient Gnosticism: Traditions and Literature, p. 150) Unfortunately, Pearson chose to write without footnotes and gives no further explanation.

Perhaps all that Pearson meant is that, given the polemical context in which the title of the text is quoted, the most that can be said with any real probability is that a book titled On the Three Natures or something very similar existed in the fourth century. Did Valentinus write it? None of the earlier authorities for Valentinus mention such a text belonging to him, and neither has any such text been found so as to evaluate its contents, so making such an ascription seems doubtful at best.

There is at least one book known to us that has a similar but not identical title. That text is the Trimorphic Protennoia (“First Thought in Three Forms,” the title found at the end of the text) found at Nag Hammadi. Another possibility to mention is that Gnostics known to Marcellus had in their possession excerpts of the work of Plotinus known as the Enneads (similar to the manner in which we have found excerpts from Plato at Nag Hammadi). Plotinus, as published by his student Porphyry, wrote in the third century. Of his work, V.1 was titled, “On the Three Principal Hypostases.”

Knowledge of a work of the title he mentions (On the Three Natures, a lost text) or a similar title in the possession of Gnostics (such as the two just mentioned) could have lead Marcellus of Ancyra to attribute the text he talks about to a famous early Gnostic, Valentinus, as a way of attributing the ideas of his opponents to a known heretic.