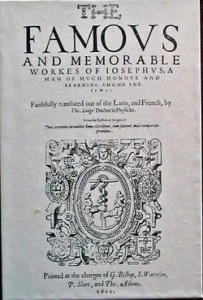 Roger Pearse has an excellent webpage on Josephus: all the Manuscripts, where such texts are mentioned. Dozens and dozens of examples are cataloged and described by Pearse, with such extracts generally classified as “Miscellaneous.”

There are also examples in Latin. For instance, there is a mention of “extracts from Josephus and other Greek and Latin authors (Gwysaney MSS. 46, 47, 53)” in an early modern collection.

This BAR article used an image of Codex Parisinus gr. 2075 (one of the very many such “miscellaneous” manuscripts described by Pearse) to illustrate the Testimonium Flavianum, which it quotes. 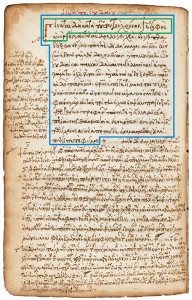 Sometimes the text of Josephus is mediated by the quotations of Josephus from Eusebius, and this may be particularly applicable in the Latin and Syriac versions of Eusebius, when the translated quotations in Eusebius may sometimes have been the only source for the Antiquities of Josephus available to the writer in that language. There is, for example, this example of a so-called Letter from Pilate to Herod: “These letters occur in a Syriac manuscript in the British Museum, dated in the sixth or seventh century. There is a Greek copy in a Paris museum.” At the end of it are appended three quotations, apparently attributed to Justus of Tiberias, the emperor Tiberius, and Josephus. The quote from Josephus, regarding Herod Agrippa and his death, receives the following note: “This extract from Josephus is abridged from the account of Eusebius in his History of the Christian Church.”

Alice Whealey notes that this also appears to be the case for this quotation of Josephus, Ant. 17.168-170, by way of the Syriac translation of Eusebius, HE 1.8.5-7, found in Michael’s chronicle, itself in Syriac (“The Testimonium Flavianum in Syriac and Arabic,” New Testament Studies 51, pp. 573-590):

JeanBaptiste Chabot, the first Western scholar to edit Michael’s manuscript, had already long before observed that material in Michael’s account of the first century was dependent on a source that had quoted excerpts of Josephus from the Syriac Historia Ecclesiastica rather than translate them directly from Josephus’ works. For Chabot supplemented and corrected a quotation by Eusebius (HE 1.8.5–7) of Josephus’ works (Ant. 17.168–170; Bell. 1.656), which appears in Michael’s account of the first century, with readings of the Syriac Historia Ecclesiastica. Moreover, Michael’s chronicle states clearly that this particular quotation was actually taken from Eusebius’ works rather than directly from Josephus’ works. A close comparison of this passage from Michael’s chronicle with Syriac Historia Ecclesiastica 1.8.5–7 confirms that the former text quotes from the latter text.” (p. 580)

The quotation found here, like the previous abridgment in the Letter from Pilate to Herod, regards the death of a Herod found in the New Testament, this time the death of Herod the Great.

These extracts are not useful merely on their own, as possible witnesses to the original state of the text. Knowledge of these extracts, specifically and in general, also help us to figure out what options there are for the likely source of quotations from Josephus found in other texts. It is possible, for example, that the quote from the chronicler or the apocryphon above is not only mediated from Josephus by Eusebius but also mediated from Eusebius by way of a collection of excerpts. Such texts were convenient, economical, and ubiquitous, particularly in use in preparing other historical works. Often they were made by the author for the purpose of their own use, but they also were often shared, published, and used by other authors who quoted someone such as Josephus from extracts.

3 Responses to “The Quotable Josephus”