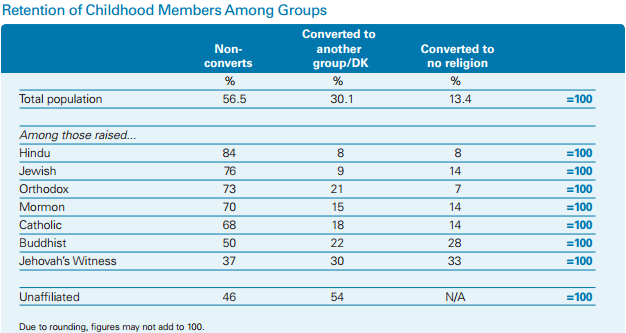 Here’s the break-down: of the 162 responses that said they were raised as an atheist, 1 came from a pagan, 1 from “liberal faith,” 2 from Unitarian Universalism, 1 from Shinto, 1 from a Hindu, 6 from Buddhists, 1 from a Shia Muslim, 4 from Jews, 2 from Jehovah’s Witnesses, 1 from a Mormon, 2 from Orthodox Christians, 17 from Catholics, 56 from Protestants, 43 from atheists, 6 from agnostics, 13 from “none,” and 5 from “Don’t Know.”

Or, looking at those who say they were “raised atheist” and their answer to whether they believe in God or a universal spirit, 55% say yes, 26% say no, 6% express another opinion, and 13% say that they don’t know.

If you can spin a narrative from that, great. Most commonly suggested is that atheist parents are rather good at making Protestant children in America. Yet all the normal caveats to interpreting statistics apply. I am reluctant to bring them up because I am an atheist myself. I prefer to accept valid empirical data. However, previous (apparently gleeful) reports don’t mention any caveats to interpretation at all, so I guess someone has to do it.

(1) Small sample size (for this subgroup, as the survey itself is one of the largest of its kind)
(2) Possible lack of fit between what people answer and how we understand it
(3) Possible lack of correspondence between self-reporting and actual fact

(Yes, Americans sometimes have a problem with being entirely truthful to the survey takers on religion.)

Indeed someone has looked at this and related phenomena more closely: Stephen M. Merino in his article Irreligious Socialization? The Adult Religious Preferences of Individuals Raised with No Religion. His article is significant for attempting to break down the phenomenon by age cohort. His study looks at the entire group of people raised with no religion (including as atheist, agnostic, or “none”). 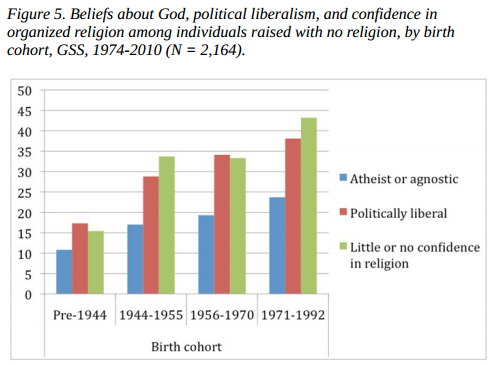 However, as they say in finance, “past performance is not a guarantee of future results.” If we want to know what young people today will grow up to believe, only time will tell.

PS – You can download some of the relevant Pew Forum data in an Excel spreadsheet here and the original data here.