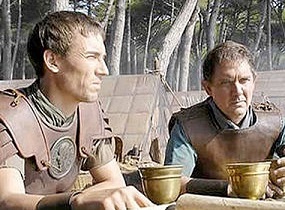 One day in 90 AD, Justus of Tiberias was sitting at his favorite tavern in the city of Rome, minding his own business, when in walks his sworn enemy Joseph.

Smirking, Joseph asks, “Hey, Justus, how’s it going for you?”

Justus shoots back, “What do you expect? Lousy.”

Joseph taunts, “Sucks to be on the losing side? You should have seen the writing on the wall, bud.”

But Justus sighs, “No, that’s not it. That’s not it at all. It’s book sales! My book’s been out for months, and I’ve only been able to get you, my mom, and the imperial librarian to make copies of it.”

Joseph says, “Actually, come to think of it, my own books haven’t been selling all too well either. I mean, not as bad as yours have, but still, not as well as I’d like.”

Justus says, “I’m not sure what I’m doing wrong. I tried to keep my writing short, sweet, and entertaining.”

“Well, at least you got the entertaining bit right,” Joseph says with a laugh. “If your idea of entertainment is sorting through a mess of deceit and vanity, then you’re well on your way to being the next Juvenal.”

On the same day, none other than Tacitus was sitting nearby and could not help but notice the subject of history being discussed, even if by a couple barbarians living off the fat of society.

“Mere brevity will not save you, little Justus, unless combined with wit and candor,” Tacitus remarks.

Tacitus was there with his friend, Pliny, to talk business with Suetonius, who sought a patron for his own endeavors as a historian. Pliny inquires, “What do you hope to gain from conversation with jesters such as these?”

Tacitus answers, “there’s one thing that I must know, and perhaps they can tell me because it regards their own people and their own lands. Who is the founder of this group they call Christians?”

“No, I’m pretty sure it’s Christians.”

“I always hear them called Chrestians. They think they’re so good.”

“Then why do they call their founder Christus?”

“I’m pretty sure it’s Chrestus. He caused some trouble a while back under Claudius, in Rome. Even got these Jews kicked out for a while.”

Pliny suggests, “Well, why don’t we ask the gentlemen from the east to help us out?”

Tacitus bellows, “A fine suggestion! We shall see who’s right.”

“Or Chrestians,” Justin adds. “They’re referring to the prophet Isaiah, who said that, ‘there shall come forth a rod out of the stem of Jesse, and a Branch, in their tongue “netser,” shall grow out of his roots.’ Actually, I’m not sure, but I think they only use Isaiah and the Psalms, where they seem to get most of their ideas.”

Joseph replies, “You’re just showing off your ignorance, Justus. It’s easy to see why you have such a hard time getting people to pay attention to your books! These Christians clearly get their name from the Greek word, ‘christos,’ someone ‘dabbed in oil,’ referring to the initiation they all undergo before calling each other brothers.”

Justus replies, “No… that can’t be right… I’m quite sure that the last time I was in Judea, they were being called the sect of the Nazarenes. And they spoke Aramaic. Why would they use a Greek name?”

Joseph says, “Well, I’d like to see you prove it. I’ve got a book of their own into my hands, and it says right there, according to one of their own, someone called Philip, that Christians get their name from their ‘Chrism,’ after which their founder is also called Christus.”

Justus asks skeptically, “What, they gave you a copy?”

Joseph says, “No, I paid to have it made. Helps to have the favor of the emperor, doesn’t it?”

Tacitus interrupts, “Now, you two, quit bickering like children. Justus, you’ve heard the claim that their founder was called Christus. Do you deny it?”

Justus says, “I think his real name is Joshua.”

Tacitus says, “That may be, but he is also called Christus, is he or is he not?”

Justus says, “Maybe a kind of Christus, based on the prophecies…”

Tacitus says, “Good. That explains the origin of their name. Now, when did this Christus live?”

Justus says, “Well, I think the whole idea of a Christus is that he is someone who is going to be, not someone who was and is no more. They hope for the arrival of their Christus.”

Tacitus replies, “Cut the crap. I need real answers. Joseph, do you know?”

Joseph replies, “I’ve never met him. There are so many people named Joshua. You think I know all of them? Just because I’m a Jew?”

Pliny offers some information to smooth over the situation. “Look, I have had some experience with the Christians myself, in my tour of Syria. At Antioch, I asked some of them about their superstition, and they replied that their Christ stood trial and had been killed because of the Jews when Tiberius was emperor. They explained that they really just like to sing hymns early in the morning all peaceful-like. They were a lot more civil than the Jews with which we’ve had so much trouble.”

Justus says, “But they are Jews.”

“Shut up, Justus,” Joseph slams back. “Nobody cares what you think.”

Tacitus offers, “So it’s agreed then? This Christus was executed by the Jews under Tiberius. His followers did not stop their craze over him, and they are the ones called Christians today.”

But Suetonius says, “Well, even if they aren’t really Chrestians, and even if they don’t really come from Chrestus, nobody’s going to believe a story like that, Tacitus.”

Suetonius seized the opportunity to show off his skill as a critical historian, saying, “The city of Jerusalem and all of Judea had passed over control to a Roman prefect after their last ethnarch, Herod Archelaus, under Augustus. Any legal trial with the death penalty would fall under Roman jurisdiction. Around this time, Pontius Pilate was procurator.”

Tacitus says, “Fine, then. I see the power of your argument. I will record that Christus, the founder of the name, was executed under Pontius Pilate in Judea and that the movement of Christians, called after him, found its way to Rome under Nero.”

Suetonius says, “As you wish, but as for me, all I know is that some Chrestians were blamed for the fire, probably the same ones who had been expelled from Rome under Claudius at the instigation of Chrestus.”

Pliny says, “This rancid argument tires me. All I shall say for certain is that these Christians are given to a novel superstition and are rather fond of getting up early for their choir practice.”

Joseph says, “This could come in handy selling my books! Who’s going to want to copy a grueling 20-book compendium of Jewish histories? By adding a passage here and a reference there, I’ve doubled my audience at a stroke!”

“Shut up, Justus,” comes back in unison.